Developer: Dontnod Entertainment
Publisher: Square Enix
Platforms: PC (Steam), Xbox One, PlayStation 4
Genre: Graphic Adventure
Distribution: Digital (A boxed release will most likely follow once the season is done like with the first season and Before the Storm) 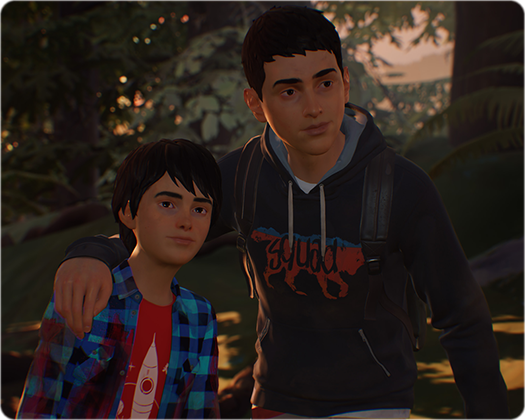 Life is Strange 2 sees players in the shoes of brothers Daniel and Sean Diaz. The player as Sean (16) will go on a year-long trip with Daniel (9) that will take them from Seattle, Washington to their family's hometown in Puerto Lobos, Mexico.

Starting in October 2016, three years after the events of Life is Strange 1 and the story of Max Caulfield and Chloe Price, Sean and Daniel go on the run after an incident that sees the death of their father and changes their lives forever. Over the course of the year, the Diaz brothers will encounter other characters and situations as they try and make their way to Mexico.

The themes cited for the game are brotherhood and education, the latter having a massive effect on Daniel. The choices you make will have an impact on his behaviour.

Will we see Max and Chloe in this game?
Likely not. Dontnod had said previously any new games would be set with new stories, new locales and more outside the first game. So your chances of seeing them two in this - and likely any other characters and locales save for maybe an easter egg of sorts - are slim-to-nill.

Do I need to play the previous games to know what's going on?
For Life is Strange and Life is Strange: Before the Storm, definitely not. Those two games are self-contained away from LiS2's canon and are not necessary before starting LiS2 (Though that being said, you should definitely play them anyway if you haven't already because they are great games in their own right).

A playthrough of Captain Spirit is recommended, however. Acting as a standalone prequel to Life is Strange 2, your choices in that will impact the main game. And also it's only two-to-three hours long and it's free on whatever platform you want to play on so jump on that.

What are your thoughts on Hot Dog Man?
I love him.

What are your thoughts on Tom Nook?
THE DEVIL INCARNATE. Also, this is the wrong thread/franchise to ask me this. 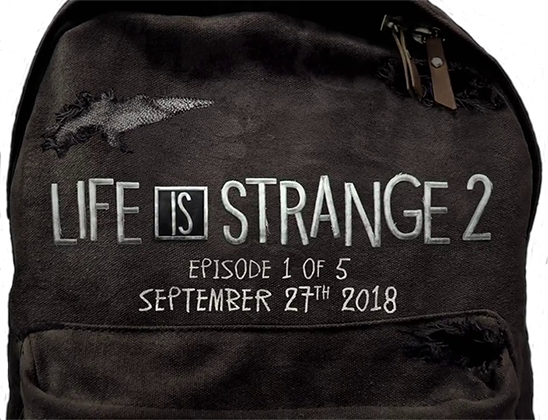 Not much has been revealed on the game's soundtrack, although a Spotify playlist made by the official Life is Strange account has already posted two songs into a game-specific playlist: Liztomania by Phoenix and On The Flip Of A Coin by The Streets. The playlist will update as the season goes on and more music is publicly debuted in the game.

The first season had a varied array of artists such as Jose Gonzalez, Foals, Alt-j, Mogwai and more. Before the Storm had a mostly original soundtrack from UK band Daughter but had a few other artists such as Wolf Alice too.

For originally composed music, Syd Matters' Jonathan Morali returns from the first game to provide his take once again.

WCCFTech - 9.5
GameRevolution - 3.5/5
AOTF - 4/5
USGamer - No score ("Life Is Strange 2's debut episode, despite its faults and its slow-moving pace, starts the series off compellingly, setting off on a road trip adventure that I'm sure will bear more hardship for the two brothers than unlikely friendships. It's telling a very different story from its predecessor, but thus far it retains the most important element: making us care about the characters, wherever the journey takes them.")
VentureBeat - 8.5
Game Informer - 8.25
Destructoid - 8.5
PSU - 9.5
Gameblog.fr - 8
TrustedReviews - 5/5
IGN - 7.7
TheSixthAxis - 9
GameSpot - 9
GamesRadar - 3/5

Thanks to Fantomas for the banners and CrazyDude for the OT suggestion! 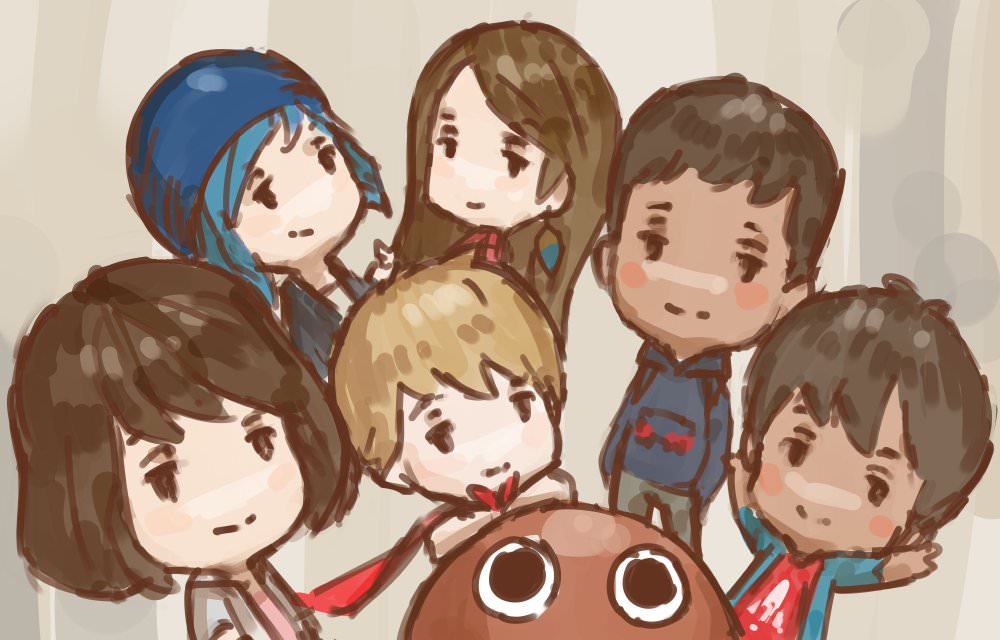 Can't wait! Already have it installed and hopefully this time the company I bought a season pass from doesn't go bankrupt!

Walking Dead Final Season was the first season pass I bought and this is the second.

Is this tag ok?

Fantastic job on the OT JehutyRunner!

Can't wait to start throwing out wild theories with everyone between episodes!!

We got our code today, they’re letting us post the opening of the game. I’m not home right now but if anyone is interested in that, I can probably post it tonight and embed it here?

Edit: Here's the opening chapter of the game, if you want to go in not knowing anything substantial, I highly advise not watching the last 4 minutes of the video. I did a lot of exploring so people could get an idea of the world and stuff so that's why it's a bit lengthy. Other than that, it's off to a great start, I stopped playing after this so I could upload it but I'm going to go back to playing right now.

The Flagpole is Wider

Already pre-ordered and ready to dive in!... after I finish Dragon Quest XI.

God I hope this turns out great.

Away from my consoles for the week, so I’ll be avoiding all talk until Saturday/Sunday.

Excited to see how Dontnod can make me sad this time

Bravo at the thread title. I would have also accepted something mentioning FINAL FANTASY THE SPIRITS WITHIN which is the best movie.

My most anticipated release of the year lol. It's gonna be hella good

Is there going to be a demo for this?

ashtaar said:
Is there going to be a demo for this?
Click to expand...
Click to shrink...

There was a demo of the first game where you could play the opening twenty minutes of episode one after launch, though they later made episode one free outright.

Anyway, based on that... maybe?

Completely forgot this was coming out in a few days. I can't really say that I'm extremely excited but it'll likely be a good ride nonetheless. Already got it pre-ordered so all I have to do now is wait.


Grisby said:
Bravo at the thread title. I would have also accepted something mentioning FINAL FANTASY THE SPIRITS WITHIN which is the best movie.
Click to expand...
Click to shrink...

I actually don't know if im getting this or not despite 1 probably being one of my favorite games I have ever played.
wait and see how it is I guess.

With all the Telltale stuff that’s been going on, I completely fucking forgot that this begins this week. The first trailer looked good, but I’ve been avoiding everything about the game since then. Can’t wait to dive in.

Great OT, not sure when I'll start it, but whenever I do I'm really looking forward to seeing how this story unfolds.

Most anticipated of the year. Gimme that soundtrack.

Excited for this, but I hope I can buy the episodes separately. I don't think I'll have $40 to spend on this any time soon.

Been avoiding everything since the first trailer, can't wait.

Oddly enough this is the first episodic game I'm going to be playing as the episodes are coming out. It's going to be hell waiting, but that's how dang excited I am for more Life Is Strange.

My timer says the game will unlock Wednesday at 12PM!!

I'll probably wait for a few episodes to come out before I jump in, but barring a critical slapping, I'm going to jump in eventually.

The Amazing Adventures of Captain Spirit was, for me, the most concise and focused episode Dontnod has ever put out, so I hope they continue building in that direction.

Really hoping this is as good as S1.

I'll probably wait until episode 3 to see if I'll jump in.

This is gonna be amazing! Great OT, and I'm so excited to finally play later this week!!

Xyer said:
Really hoping this is as good as S1.

I'll probably wait until episode 3 to see if I'll jump in.
Click to expand...
Click to shrink...

You 'gon get the game spoiled for you on a YouTube thumbnail, bro

I've been waiting for a S2 since S1 ended lol. The first season is one of my favorite games of all time. It's almost here now!

Really looking forward to seeing how this turns out! I trust that Dontnod will turn out another compelling and moving game.

I really hope there's a satisfying story to their arc even if they are not to protagonist.

CrazyDude said:
My timer says the game will unlock Wednesday at 12PM!!
Click to expand...
Click to shrink...

Just about a month short of three years since the final episode of season 1. Time flies.

Come on Dontnod, keep that quality up. I believe in you.

Joeku said:
Just about a month short of three years since the final episode of season 1. Time flies.

Come on Dontnod, keep that quality up. I believe in you.
Click to expand...
Click to shrink...

Well Captain Spirit was amazing, gave me chills at the end. I guess this is going to be amazing. Gonna be hard to play this and know there's a long wait til we have the complete game. But I cannot miss this.

Yeah mine also says it's playable in 1 day 15 hours. Noon on Wednesday eastern time. Or does that just mean you can download it then?

Bets on which brother is going to die at the end? I'm thinking Sean.

TheIdiot said:
Yeah mine also says it's playable in 1 day 15 hours. Noon on Wednesday eastern time. Or does that just mean you can download it then?
Click to expand...
Click to shrink...

You can already download it. Mine is already installed.

No hype for this but I'll play it. Loved the first game but not sure about the trailers and Captain Spirit demo.

Is this tag ok?

Hmm, no pre-load on Steam from what I can tell.

I wouldn't be surprised if it releases on Wednesday though, they've done single global release times in the past for BtS and CS, so they might be about to announce the same for this.

You're our only hope now Dontnod. Do not mess this up.

I'm still undecided as to whether I'll jump in at the beginning. I'm so very tempted...

Hardhat said:
Bets on which brother is going to die at the end? I'm thinking Sean.
Click to expand...
Click to shrink...

It's gonna go somewhere more interesting than that. Have some faith in DONTNOD!

...The big bro's actions will decide whether or not the little brother kills someone and goes to prison. It will be very heartfelt.


Spyder_Monkey said:
You're our only hope now Dontnod. Do not mess this up.
Click to expand...
Click to shrink...

I don't know if I'm more excited about the game or its soundtrack.

If anyone is interested, I'll be streaming a little bit of the game in a few minutes. SQ has given me permission to stream up to a certain point and I plan on using that time. If you wanna check it out I'll be at mixer.com/shadowhaxor.

Nice OT! Looking forward to having everyone play the game this week! As with the other OTs, feel free to @ me if you have any questions or run into any problems.

We'll be announcing the release timings of the episode later today in case anyone was wondering.